Nope, it’s not a baby. Nope, it’s not a puppy. Nope, it’s not a loaf of sourdough bread from San Fransisco (though I certainly wouldn’t turn the FedEx guy away if he was carrying that box). It’s our new camera. Christian and I splurged on something special this Christmas (with help from a wonderful Best Buy Gift Card from my old boss at HuebnerPetersen). We’re so excited to welcome our new Canon Rebel T3i to the family. There was some initial discussion over whether this camera or Charles is the most expensive family member, but Charles certainly won out with his manic health emergencies and pure bad luck. Needless to say I’m super excited, even if I’m still figuring out how you actually take pictures. Thank you Pioneer Woman, for putting some of that crap in layman’s terms.

I aim to be the next Ansel Adams — or just, you know, document my culinary creations, travel adventures and Charles sleeping. Life is all about having big aspirations.

Over the course of my unintentional sabbatical some exciting things happened. For starters Christian (the C man) got down on one knee, gave me something sparkly and I said yes. Meaning that we’re engaged. As in getting married and becoming one with lots of lovey dovey, mushy stuff. As in engagement photos and wedding planning and cake tasting. Truthfully, I haven’t even got to the cake tasting part but good Lord that is the thing I’m looking forward to the most. I love me a good cake.

As you can imagine things have been hectic. Somedays I feel like a crazy person running around while other days I’m totally nonchalant as in “This wedding that’s quickly approaching? No, of course it doesn’t phase me”. I’d say you’d have a 50/50 chance on who will show up on any given day. We’re also house hunting because who doesn’t love a little added chaos? I know that I sure do. We actually wrote a contract and made an offer on one so keep your fingers crossed.

Charles doesn’t know what to make of the situation, though I’m pretty sure he’s excited to have a Father. Jacqui’s response when I told her about our engagement was “Oh good, Charles won’t be a bastard anymore”… so clearly it’s something that’s been heavily weighing on him.

I promise to give more updates soon… I’ve been so brief and there’s so much going on!

I’ve been a little few and far between with my posting lately. Part of me thinks it’s because I’m gearing up for Nablopomo yet again and can’t waste it all in October and the other part of me is feeling entirely uninspired. It’s a cloudy day here in Colorado and it’s going to start raining in the next couple hours. I love rain. I love fall.

Christian’s out of town all week… that coupled with the cloudy weather and fogginess of Monday have me feeling a bit melancholy. I’ve got hot plans to roast a chicken with some veggies and whip up a pot of steamy mashed potatoes tonight for dinner. I can’t think of anything better.

I’ve got an exciting evening tomorrow with the Nuggets pre-season game, so I’m more than excited to slip into some sweats, snuggle up with Charles and the roomie and call it a night. Hope you have an equally perfect evening!

I took Charles for a walk tonight, right at dusk. I hate that the sun drops so early these days. The passing of summer with its sense of adventure and warm weather always brings a mixture of emotions for me. I love fall with all my heart. The feeling of coming home, being centered and knowing that it will all be alright. The changing leaves, soup season, start of a new school year, temperatures that call for a sweatshirt at night, Halloween, Thanksgiving, they all do it for me. One by one and as a whole.

It just hit me tonight that it’s really fall despite my best attempts to hold it off. Walking by sprinklers and wet grass through piles of dropped leaves really sealed the deal. This is my favorite time of year (though Christmas holds a special place in my heart as well) and all I want to do is make some potato soup and go wrap myself in a sweater and spend the last few nights I can outside.

Charles survived his surgery… only to come back to me as Frankenpuppy. He had a gnarly 3.5″ incision with rough looking stitches covering his abdomen — all the way from his sternum to his man business. Take a peek:

I was a little shocked when I picked him up that 1.) his incision was GINORMOUS and 2.) that he was so out of it. Each call from the dr. and his student made it seem as if Charles was up and running around, eating and making friends with everyone. Not so. He was acting like a tiny sickling that needed constant care. 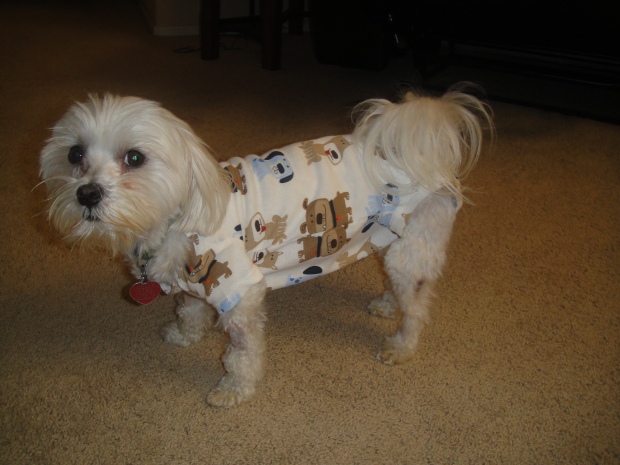 Fast forward about a week and the little man is living in onesies, so that he doesn’t lick/chew out his stitches. This wardrobe choice has also lead to a few wonderful potty problems from wetting his onesie to having some poo trouble in the onesie. He’s in desperate need of a bath. Desperate.

I took him to get his stitches out on Saturday and he decided the night before to help the dr.’s out a bit. He took out the top 1/3 by himself. The only reason I let him out of his onsie was because my mom kept saying, ALL WEEK, “He’s just licking, he leaves them alone except for some licking. He won’t tear them out”. Well she was wrong.

Nonetheless, he seems to be doing well. I’m jamming his Amoxicillin pills down twice a day in addition to his normal medication and prescription kibble routine. I’ll keep you posted, but so far so good.

P.S. I forgot to mention that I caught him eating his own poop. I can barely look at him. Maybe the antibiotics give it some extra spice? Here’s to hoping it was a one time thing. (crossing fingers now)

It’s been a while. I have written a few times but either haven’t felt like posting it or just don’t know how to finish what I’ve started… story of my life. In the meantime a few things have been happening and an update is more than in order. 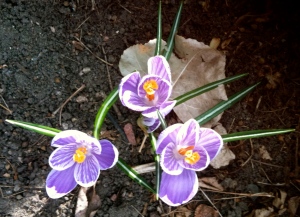 For starters, it looks as if spring may actually appear… if you can rely on a few flowers poking through the dirt to determine that. Though Denver’s tricky weather fooled me again today — when will I learn that sunny in Denver will equal winter in Loveland? Note to self: BRING YOUR FREAKING COAT. I froze my buns off today.

On another note — Charles has taken over my hamper, which originally I assumed was to chew on my clothes and eat my underwear (who wouldn’t sign up for that?), but it appears that he likes to sleep in there or hang out or do whatever it is dogs do when we’re not looking — like take over the world. It was definitely a surprise to find him in there and then watch it topple over as he tried to drag himself out. Charles getting all snugly: 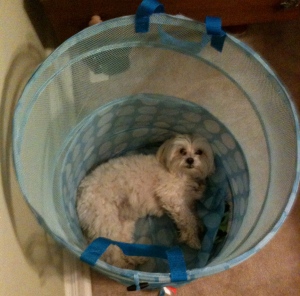 We’ve also had a bit of excitement with our drier. Now I know it’s hard to not get all riled up with just the mention of a drier, because we all know that driers are like sex. They’re something everyone secretly wants to talk about, but doesn’t because they don’t want to seem like the creeper that breathes heavily in the corner. So, now that I’ve put that out in the open, our drier is broken. We broke it and by we I mean it was Lindsey’s death blanket and my idiocy of actually putting it in the drier that finally sent it into revolt. See, Lindsey has this blanket. It’s chenille-y and rather comfortable. The color choices are questionable but it kept me warm for the past few months so I decided it deserved a wash. I washed it with another blanket and some snowboarding gear. This was not a good decision. After a trip through the spin cycle my other blanket, snowboarding pants, and snowboarding jacket were all covered, COVERED in pink fuzz. I “air-dried” the snowboarding gear and tossed the blankets in the drier assuming it would all, miraculously, find its way to the lint filter and we would be done with this shenanigan. Well, some of the fuzz made it to the lint filter, but the rest seems to have camped out all over the inner workings of our drier… meaning no drier for Megan… or Lindsey. But, that’s besides the point.

I hadn’t done laundry in 2 weeks. And I go through a lot of clothes in two weeks and the pickings were getting pretty slim. There are only so many times that I can re-wear the same jeans without everyone in my office wanting to pitch in and buy me a second pair… I spill a lot and the mustard stains are hard to pass off the next day.

On Monday I just couldn’t take it anymore,  I decided to wash ALL MY LAUNDRY with hopes that our drier would make a spectacular recovery and come through for me. Well it did not – despite my roommate and her boyfriend’s best attempt to vacuum out all the lint. So… being the creative one that I am, I decided that it would be a just wonderful to use my panties as decoration and hang them from the wall art, in the dining room, to dry. I’m thinking we could make it a permanent installation. My roommate’s sister was particularly impressed and left us with this little gem, “P.S. Megan’s underwear makes for nice decorations”. I couldn’t agree more.

Somehow this post became a lot about underwear and panties, whatever strikes your fancy. Go me.

Seeing as it’s Thanksgiving, I find it more than appropriate to express my gratitude for so many things in life. My friends and family… honestly I couldn’t live without them or their inappropriate senses of humor. You know who you are. These “saying thanks” things can get a little overwhelming if you think about it. We’re so blessed and there are so many things you should mention. Sort of like an Oscar speech, if you forget one person… they’ll never let you live it down. So… here are a few things I’m thankful for:

1. My mom always losing her keys, her credit card, her mind… and allowing me to mock her.

2. My sisters varying degrees of laughter. You never know what you’re going to get.

3. My Dad’s random and off the wall comments sometimes referring to turkey s**t.

4. All of my friends, their floor dancing, chats over wine, unwavering support, and all the hysterics that go with it.

5. Charles. I’m just thankful for my dog. He’s a jerk and he can be a pain in the butt, but I heart him and his trash eating ways.

6. Chapstick… you never once have let me down.

7. My iPhone. I am truly naked without it, as in can’t function.

8. Spandex, and it’s insertion into many styles of pants. Thanksgiving pants can now be fashionable.

10. Everything that I’ve forgotten and will remember tomorrow. Yeah, I’m thankful for that too.

Happy Thanksgiving everyone. Hope you ate yourself into a coma and took a nap. Then watched some football… essentially living the American dream.

Hi! I'm Megan - a wife and mama trying to wrangle the chaos and hilarity of life. Also, food is my one of my many true loves.