This past weekend my family took a little trip to Grand Lake, CO. I found the deal on one of those daily deal sites and in my head Grand Lake was a suburb (or something like that) outside of Winter Park. It was a great deal and I figured we could kill two birds with one stone – family vacay and skiing/boarding.

Well, turns out, I was wrong. Grand Lake is about 45 minutes away, and not so much in the mountains as in the foothills. Christian claims I “misrepresented the trip”, I claim that I’m an idiot and generally have no idea what I’m doing. You say to-may-toes, I say to-ma-toes. We reached the “lake house” which sounds way fancier that what it really was. Honestly, I don’t know how to describe it… looked like a woodsy motel from the outside, but felt like a cabin on the inside. Make of that what you will. It had a fireplace which was the only real pre-requisite that I had. Oh, Christian had a good time. See that smile? That equals happy and fun.

Now, this was the first vacation I’d been on with my sister in over 3.5 years. The last one was this trip to San Fran in which we made fun of my mom and I called her “scrump” for several days. She later pointed out to me that the definition of scrump on urban dictionary is not a flattering one, I say – again – I have no idea what I’m doing (or saying for that matter). We spent the evenings trying to figure out where those “weird” smells were coming from. She brought her two dogs, she’s pregnant, I have stomach issues and both our husbands/our mom tend to be more discreet on the subject… all this to say it was often hard to tell. Here’s the ladies.

Turns out, though, that it was Winter Carnival in Grand Lake. This is like a toned down, lamer, snowmobile filled version of the Corn Carnival in Gladbrook, IA from my youth. Only with a lot more people dressed in creepy costumes and snow sculptures. See said sculptures below.

We also went “shooting” — if you can claim standing on the side of a road, shooting at a hill and pretending to be doing nothing of the sort when cars drive by is “shooting”. Also it was a small gun. Please tell me, of the two pretty ladies below, who is the most threatening. In my mind, it’s a toss-up. Between my mom with her little purse and my pregnant sister wearing a cow hat, they are both equally frightening in their own right. 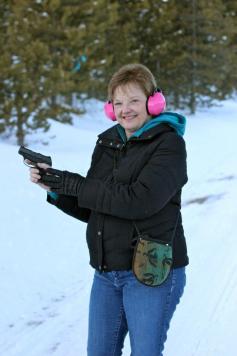 Is it just me or could my sister be the future of Honey Boo Boo? I also shot the gun, but only once because it hurt my hand. In other new, I’m a wuss. Overall the weekend was a good one. Lots of laughs, discussions on babies (re: baby fever) and time with my family. I sure do love them. Each and every one. Also, it was cold and there were fireworks.

I'm a marketer, cook, avid bug hater, cupcake lover, hiker, klutz, and married lady living in the great state of Colorado... My name is Megan Stecker and I'm a Colorado native. That's right, born and raised. I currently live in Denver and work in Marketing. I love what I do and watching it impact my client's business. I love to cook and bake. A good glass of wine can cure what's ailing you as long as you drink it in good company. I love the outdoors. Hiking, camping, exploring... I'm in. I have two dogs, Ollie and Duke, and I treat them like a children. My husband, friends and family mean everything to me. I also, inadvertently, find myself in the midst of disaster on a regular basis. View more posts