Mid-January, in the midst of my Whole 30 and the 2014 Coldmageddon, I decided that Christian and I needed a big SHAKE-UP to our workout routine. There was little appeal when it came to inserting yet another Jillian Michaels DVD into the player after work each night, and forcing myself to turn on the treadmill was all but impossible. Affording a personal trainer was out of the question, joining 24 Hour or Lifetime felt pointless since we have free rec centers (if only I’d use them) in Highlands Ranch. So, what’s a girl to do.

I’ll tell you what she did do. On a whim and the spurring of a Groupon deal, I bought both Christian and I a one-month membership (and Foundations classes) at a Crossfit box by our house. Over the years I’ve had friends, boyfriends of friends and blogs I follow get really into Crossfit, but the cost and intensity always dissuaded me from giving it a try. But, that day, there must have been something in the air because I hit “purchase” without a second thought.

Fast forward a few weeks… We were signed up for “Foundations” which consisted of 2 hours of training on Saturday and 1 hour of training on Sunday. The overarching feelings leading up to that training included: excitement, fear and sheer intimidation. For heaven’s sake, I can’t even do a girl-style push-up, how the hell was I going to do whatever they had in store for me.

You may not believe me when I say I can’t do a girl-style push-up… you may even think, “Come on, you can do at least one — you’re on your knees after all!”. But, alas, I cannot. Not a one. I’d post a video, but I don’t need that proof of shame following me around for all of internet eternity… only to surface years down the road. Nope, I do not need that.

We showed up at 11:00 and there were four other “newbies” ready (or at least pretending to be ready) to take on whatever they threw at us. Turns out, those first two hours can be summed up with one word. 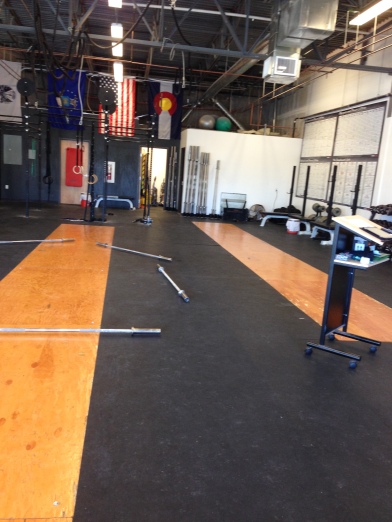 After the squatting portion (the majority of class) was complete, we headed over the pull-up bars. [cue laughter]

We were taught proper form, what kipping looked like and how to complete knees to elbows and toes to bar… all things that had my inner “can’t do a push-up girl” just about peeing her pants from laughing at the prospect.

Then, it was go time. Being rather tall, I had to jump up to the highest bar and work on flailing my curvaceous frame around. With each swing, my legs flopped and based on the feedback of our coach I was at least, sort of, doing what I was supposed to be doing. Turns out, praise gives me a big head. I swung a little harder, pushed myself more… and … then… I fell off the push-up bar, twisted my ankle and found myself with some seriously scraped up knees.

Guess I have a little work to do.  Ahem.

That mostly sums up day one. Which leads us to Sunday — the second portion of our Foundations Class.

As Christian I drove to the box on Sunday morning, we discussed what we thought we’d be doing. “Surely it won’t be more squats, right? RIGHT?”

Turns out we were wrong. (You had to see that coming, yes?) We worked on Olympic lifting, which, again, has some level of squatting for most moves. Sunday can then be summed up by eight words:

Squatting while lifting a bar over our heads.

By Monday morning, I needed help getting out of bed and made a slew of attractive noises each time I had to get out of my chair at work. The handicap stall was my friend in the bathroom and it would be accurate to say that I walked with a waddle. There were places on my body that I didn’t even know could be sore — but they most surely were. My abs over my uterus hurt. My side-boob region hurt. The back of my armpits hurt. All these little areas in conjunction with my quads, hamstrings, shoulders… (you get the idea). If it’s a muscle, it hurt. Bad.

Christian and I aren’t quitters… so we signed ourselves up for classes over the next couple of weeks, which we completed, barely (burpees are my new arch nemesis). And, so, the verdict: Crossfit is perfect for what I need now. I need the motivation, the changing up of our workout routines and something to push me further than I’ll push myself… even if it means being yelled at to lift more, go faster and stop being a complete pansy.

Have you tried Crossfit? Would you try Crossfit?

I'm a marketer, cook, avid bug hater, cupcake lover, hiker, klutz, and married lady living in the great state of Colorado... My name is Megan Stecker and I'm a Colorado native. That's right, born and raised. I currently live in Denver and work in Marketing. I love what I do and watching it impact my client's business. I love to cook and bake. A good glass of wine can cure what's ailing you as long as you drink it in good company. I love the outdoors. Hiking, camping, exploring... I'm in. I have two dogs, Ollie and Duke, and I treat them like a children. My husband, friends and family mean everything to me. I also, inadvertently, find myself in the midst of disaster on a regular basis. View more posts

3 thoughts on “That Time I Tried Crossfit.”