Last year, I didn’t post about my engagement because things were all levels of crazy around here… and writing wasn’t high on my priority list. But, this year, things are a little less chaotic, so here it goes… in Christian’s words:

Planning the engagement was tricky for me, I spent several months trying to find the perfect moment to surprise Megan and catch her off guard. I’d plan something and I’d end up having to work late, I’d plan something else and find out we had other plans. I finally made the decision to propose after Memorial Day weekend – nothing was going to get in my way. Megan didn’t understand why I would want that Tuesday off, but I managed to take it off anyways. Megan’s Dad, Karl, had also recently moved about 45 minutes away, meaning I had to talk Megan into making a quick trip up there the weekend before so I could get the address for the big day. She had absolutely no idea what I was planning.

The day of the proposal: While Megan was at work, I put my plans into action – with stops at the flower shop, the craft store (for luminary supplies) and a quick apartment cleaning, the stage was set. After lunch with my family I drove to Lakewood to ask Karl for his blessing. I asked, he said yes, and we spent the rest of the time talking war movies. From there I made the quick, 45 minute, jaunt to Cathy’s (Megan’s Mom’s) house to also ask her blessing. After a few minutes of talking, I asked her too. She gave us her blessing and then it was off to finalize the top-secret preparations.

I swung by Megan’s apartment to grab Charlie. After Charles was safe in my possession I ran home and set the scene. I lit the candles in the luminaries, sprinkled the rose petals on the floor and put out her bouquet. Once I was sure everything was in place I called her to see where she was on her drive home – being very careful not to alert her of my plans. She was almost there!

Megan has a garage door opener to my house, and she usually came in through the garage. I took the batteries out over the weekend, meaning she’d have to walk around and come in the front door. The plan worked like a charm. She rang the front door bell and finally attempted to open the already unlocked door. She took one look around and asked me what was going on with a big smile on her face. I tried to explain what I was doing as she continued, to repeatedly, ask what was going on. Megan turned bright red as I got down on one knee, told her she meant the world to me and that I wouldn’t want to spend my life with anyone else, and proposed. She said YES!

We called all of our family to share the news. After everyone was officially in the know I took her to J. Alexander’s to celebrate – it was one of our very first official dates and one of our favorite restaurants (fire grilled artichokes anyone?).

Some pictures of the day, compliments of my iPhone:

Christian (and his helper Charlie) waiting for me to walk in! 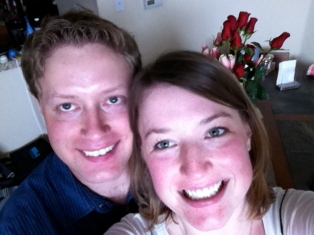 Check out the red cheeks!

The ring – so perfect!

Hi! I'm Megan - a wife and mama trying to wrangle the chaos and hilarity of life. Also, food is my one of my many true loves.